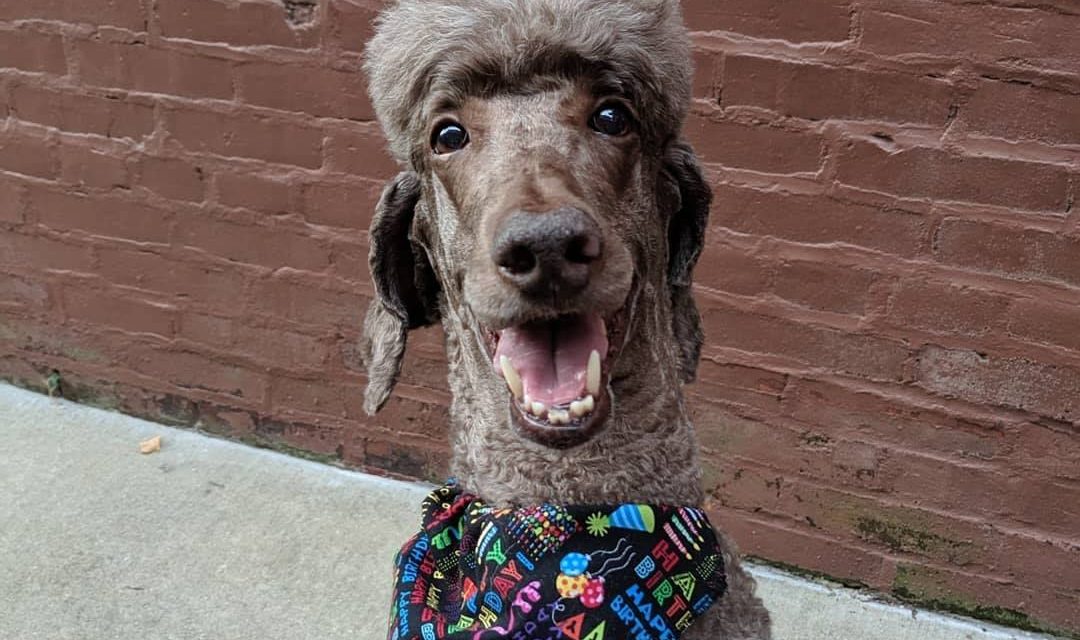 If you haven’t heard yet Oscar was diagnosed with Excessive Copper Storage Disorder. What? Yep I’ve never heard of it before either.

He also was diagnosed with Chronic Hepatitis and Fibrosis, scarring of the liver. Luckily we seemed to have caught it in the early stages so he should be okay with a prescription diet and medication.

His liver can no longer process copper, which is in most dog foods, people foods and even tap water. It’s a naturally occurring mineral, so it’s also not listed on labels. The liver is your dog’s largest internal organ with many functions, including the digestion and conversion of nutrients, the removal of toxic substances from the blood and the storage of vitamins and minerals. The only prescription dog food for liver care are Royal Canin and Hill’s Science Diet. Which Oscar is not a big fan of or of taking his medicine.

Luckily we caught it early as most dogs are not symptomatic until the final stage when their lungs fill with fluids and it’s too late. This disease typically occurs in Dalmatians, Dobermans, Bedlington Terriers and female dogs. 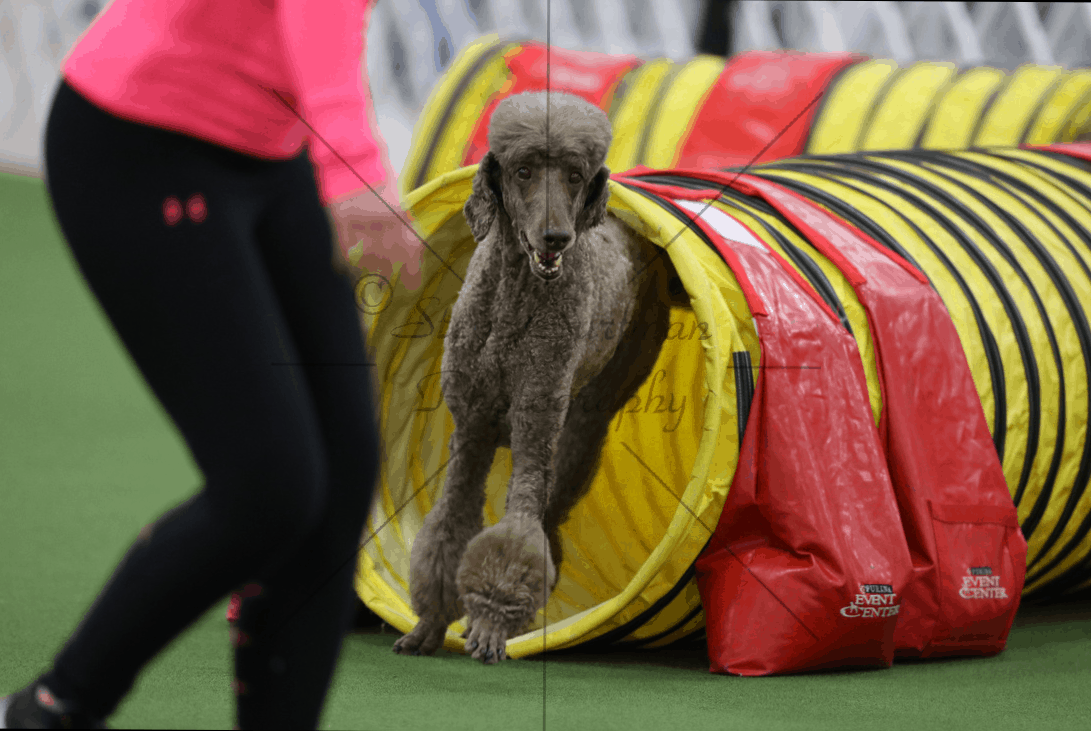 Thankfully Oscar had a huge cyst on his tail that exploded in November 2018 and never fully healed. We tried to get it to heal naturally over the course of about 6 months because otherwise it would have to be amputated.  The cyst was about golfball size filled with fluids that ruptured, so it left a rather large gap. It scabbed up a few times, then got infected a few times. The tail doesn’t have any extra fat tissue around it so it’s a hard spot to heal since they sit on it and also an easy spot to open up and get infected as it brushes up against many things.

During that time from February to April we were training about once a week for the Poodle Nationals Agility Competition, went on a 3-day road trip to teach a doga class and attend a Bobbie Lyons 2-day K9 Fitness workshop and the following weekend attended Tridex’s 2 day certified canine fitness coach training and the only symptoms he was showing was getting tired, drinking more water and peeing more. I didn’t think much of it because it was starting to warm up and being more active makes you thirsty and drinking makes you go to the bathroom more. Plus with all that activity it was making me tired too! In March he began waking me up at about 2am to go potty, but he was also almost 10 years old, so again I thought well it could also be a side effect from the antibiotics for his tail infection.

The poodle nationals agility competition was April 15th, 2019 and he had a vet appt for blood work for his tail surgery the following week April 24th. (We waited to do his tail after the competition so it had time to heal without any worries of opening and not take anytime off of training since it was so close). Thankfully everything worked out the way it did, his cyst developing, opening and never healing. I’m glad we found out after the competition, which by the way he came in first place in his division, he wouldn’t have been able to compete as this was probably his first and last time competing in PCA due to his age.

I was shocked when our vet called back and told me his liver count was 8 times higher than it should be and he needed to be seen by a specialist ASAP for a liver biopsy because he thought it could be cancer or a metabolism disease. I broke down from the shock and negative thoughts, I couldn’t believe he had cancer because he seemed just fine. The metabolism disease I thought “well he does eat a lot of cookies and never gains weight” and not only that the soonest he could get into the specialist for an ultrasound was May 2nd, about a week after the phone call, which seemed like eternity.

The ultrasound didn’t show any signs of cancer that was a relief, just his liver was small. So he was started on denarmin and ursidiol with a blood work check up on May 29th to see if his levels improved, they didn’t. So then a liver biopsy had to be scheduled. Which seemed like forever and actually it was, June 26th was the first appointment to get in. He had to go for a consultation first on the 20th to met the surgeon and for them to go over stuff…. I was like “hello”, i’m ready to do all this  like back when when our primary vet said to do so! I understand they want to do all their test and rule stuff out before a biopsy, but I just felt like time was wasted. The only thing that helped me stay strong during that month long wait before he could be seen by the surgeon was it must not be too serious as they would more than likely got Oscar in faster, going to church and Travis Greene’s Song “Intentional”

During that time I also got the dogs a massage “just in case”. I wanted to take a road trip with him to Colorado, but that was out of the budget with his vet bills piling up. I just want to live life to the fullest with him, which I feel like we are already, just time goes by so quickly. Oh and I forgot to mention during this time Leah needed to go the emergency vet March 30th because she got so constipated she wouldn’t move and her belly was swollen. I thought she might have started bloating even though she wasn’t showing any signs of bloat.

Apparently she was really constipated and had to get an enema and pumped with fluids. She went back for a follow up visit for an ultrasound the following week which showed her spleen enlarged, but no other signs of anything. The spleen is like the body’s toilet so since she was backed up, that’s probably why it was enlarged. She had a bowel movement the day before all this, she just was really backed up! Now she just has to monitored to make sure she’s drinking enough water, occasionally we’ll give her coconut water and goat’s milk to keep her hydrated, daily walks to keep everything moving, stool softeners a couple times a week and some arthritis pills to help her squat to poop.

It’s been an eventful year! Oscar did get his tail amputated, now he has a cute little nub and wouldn’t even notice. We should have just had it removed back in like February because he is so much happier without it! It all worked out in the end because that’s when he was diagnosed with everything. Otherwise it might have been too late when we found out when he was due for his senior blood work in October 2019.

Side note: Oscar frequents the vet in general because he had a bad reaction to the canine flu shot when he was about 2 years old that almost killed him. Now my dogs get their shots spread out throughout the year and titer testing for dhpp. If you can afford it, I would recommend spreading their shots out instead of all at once.

Oscar went for his re-check of blood work last week September 17th and his numbers had now dropped within the normal range with the prescription diet and medication. He goes back in 3 months and will probably be medication for the rest of his life.

Excessive Cooper Storage Disorder is similar to Wilson’s Disease in People and he is on a pretty strict diet now as most things contain copper. Right now it’s all about living his life to the fullest, but also to keep weight on him. Lack of appetite is a symptom of the disease and the medication makes him nauseous. He isn’t liking being on such a strict diet and taking his medicine, so he has been getting more home cooked meals and treats throughout the day to help maintain his weight and try to gain a few pounds back. He also takes more of an easy now as another one of the symptoms is muscle weakness and fatigue, which he is showing, but again he is an older dog too.

This is not that common of a disease, but if you dog does end up being diagonsed with it, here’s a helpful facebook group: Dalmation Copper Storage Disorder Interest Group. Otherwise give your pups a hug because time goes by so quickly!

A year later Oscar is doing well! He is on his prescription diet and medication. He also gets bloodwork every 3-6 months to monitor his levels, so far everything has been stable <3

He also gained back the pounds he lost and is back up to his normal weight. He also has his regular appetite back for the most part. He tolerates taking his medicine now. All and all we are very blessed, it took awhile to figure out what was going on with him and adjusting our lifestyles, but we’re still so thankful for catching it early on. He looks really cute with his little nub tail, still being his goofy self, putting a smile on everyone’s faces 🙂

If you would like to support Oscar’s unexpected medical bills come to a class or take a look at our online store! We have cute dog mom shirts with matching pink paw print leggings  or a puzzle ball to keep your dog mentally engaged! There’s also balance disc to keep your dog strong and more!

Here is a 10% off coupon code for our appreciation: OSCAR 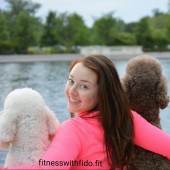 Kimberly is the owner of Fitness with Fido, pictured with her two lovely poodles Princess Leah and Oscar. 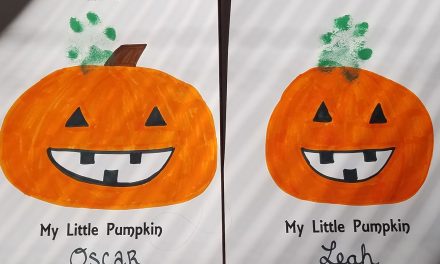 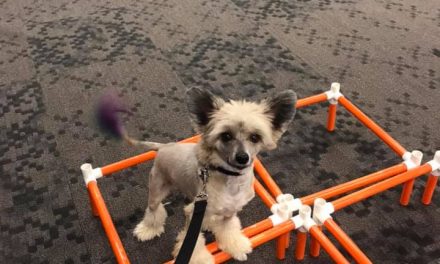 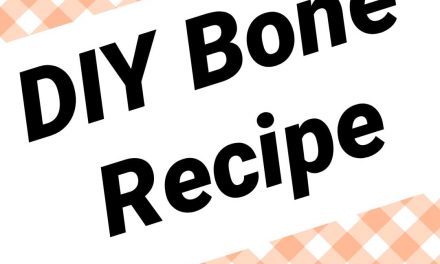 Prepping the dogs for baby